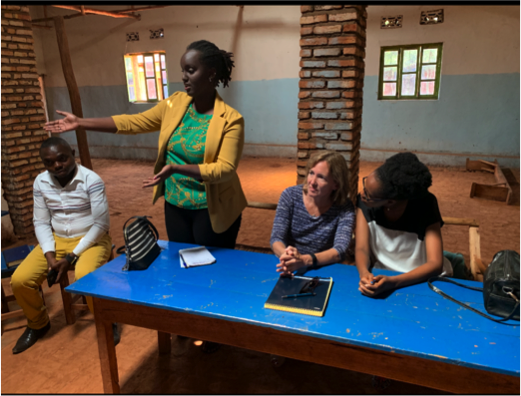 “Never in my life did I think I’d be here,” says 23-year-old Peilla Ishimwe, describing how the gift of educational support has sent her around the world to train as a social worker and advocate for women and communities of color. Peilla grew up in Gitega, Burundi, the youngest of 4 in a middle-class family. After her father passed away in 2011, the family encountered many challenges. She explains that men are the main breadwinners in Burundi: “Women are known as someone’s daughter, someone’s wife.” Without her father, how could Peilla pursue her dreams of higher education?

Enter Higherlife Foundation, a Zimbabwe-based nonprofit that combats gender inequality with opportunities in education, health training, and economic empowerment. When Peilla was in the 10th grade, she learned of Higherlife scholarships for girls in sub-Saharan Africa. Yet a roadblock loomed: she spoke French and Kirundi but would need to pass a rigorous English test and interviews to qualify. Higherlife helped by enrolling Peilla in an English course. After intense study, she passed the screening and was selected from 10 applicants for the scholarship program.

Higherlife sent Peilla far from home, to eSwatini (formerly Swaziland) on the eastern border of South Africa. There, she was able to attend Waterford Kamhlaba United World College of Southern Africa – one of Africa’s top schools, designed to graduate global citizens who will make a positive impact on the world. For her final two years of high school education (2015-2016), Peilla completed Waterford Kamhlaba’s International Baccalaureate Diploma Program, which prepares the students to attend some of the world’s leading universities. And this was only the first of a remarkable series of international educational opportunities for Peilla.

Faced with a political crisis at home in Burundi, Peilla decided to apply to colleges in the United States. She selected Luther College in Decorah, Iowa, which offered a full scholarship and the opportunity to earn an undergraduate degree in social work. “I did not know where Iowa was, I was just going to school and that was enough for me,” says Peilla. When she reached Iowa in 2017, she found that she needed to learn how to navigate a very different life. As she wrote in Where Passion Meets Purpose and Profession, Peilla
had the distinction of being Luther College’s first international student from Burundi. “I have had to adjust and adapt to a new culture. It has taught me resilience and brought strength to my character and personality.”

Peilla dove into her coursework, focusing on issues faced by women of color, immigrants, and refugees. She repeatedly earned distinction on the Dean’s List as she worked toward a Bachelor’s degree in Social Work. But Peilla yearned to see her family and home country after so many years apart. In 2019, she googled “nonprofits Burundi,” discovered Burundi Friends International, and contacted Executive Director Julie Marner. Julie called back within 24 hours, immediately seeing what a treasure Peilla would be to BFI. They set up a 7-week internship in the summer of 2019, in which Peilla served as a Community Facilitator with BFI’s Women Empowered (WE) program in Burundi.

During her BFI internship, Peilla met with groups of 15-25 rural women that had been formed to save money and start small businesses. Using her natural teaching ability and gift of languages, Peilla encouraged the women to fully participate in the savings methodology, practice new leadership skills, and accomplish personal and community- wide goals. She also worked with BFI staff to collect and process data, reviewed the pilot project, and identified challenges – helping to improve processes for the entire program. At the conclusion of the program, Julie met Peilla in Burundi, and they traveled to Gitega to visit savings groups together. Julie noted how warmly Peilla was received by each member. “Her manner of relating to them was kind, friendly, humble, and professional. Her address to each savings group offered support and inspiration.”

Burundi Friends International (BFI) is a 501 (c) (3) nonprofit organization. We invite you to contact us to volunteer and join in our work to end poverty and create self-sustaining opportunities for Burundi, or donate to support BFI’s mission.